An accomplished solo artist with his signature style, a competent band member, an enthralling session player, a master producer, and a crackerjack bitten by the travel bug – Tony MacAlpine is a name that rhymes and resonates in perfect unison with the modern techniques and contemporary trends of the guitars and music acoustics of the present age.

His style is unique, majorly inclined towards classical, rock and fusion. Holding a substantial expertise on his instruments and chords, he sure knows how to squeeze the tones and carve out music planes, in rock as well as metal domains, through guitars and keyboards alike.

Born on 29th August 1960, Tony set his hands on a piano at the age of 5 and moved on to explore and ace the intricacies of guitar chords by the time he was 12. Having started playing at such a young age, it came as no surprise that Tony MacAlpine was introduced as an emerging music sensation in the Guitar Player magazine in an article by Mike Varney in 1984.

Having started learning the tidbits and intricacies of the chords, keys, and strings, Tony MacAlpine made a brisk and promising start to his professional career in the 1980s, launching his debut studio album ‘Edge of Insanity’ featuring Billy Sheehan and Steve Smith in 1986. A year later, he teamed up with George Lynch, Deen Castronova, Atma Anur, and Jeff Watson to produce ‘Maximum Security’ in 1987. Both records received a tremendous applause from the music enthusiasts and critics alike. Not looking back since, he has progressed to ace his domain and has produced some records and releases, solos and joint ventures, to extend his music profile. 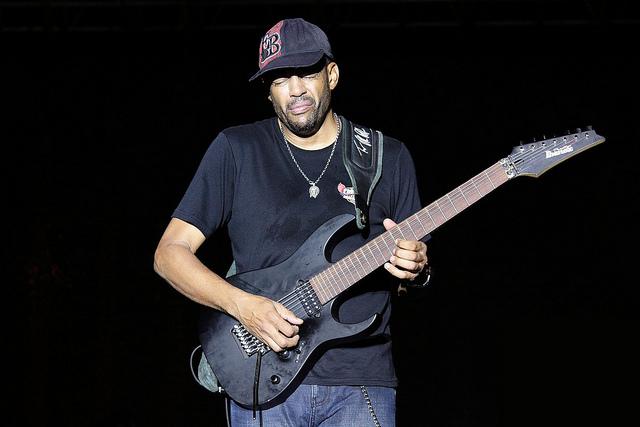 Tony MacAlpine is known for the variety of his fusion techniques. He possesses this magical tendency to play complex shreds and pulls. One of his most famous techniques is the eccentric modification of sweep picking into sweep tapping, which he manages to pull through a perfect blend of his skills. Once influenced by the neoclassical metal genre, Tony MacAlpine explored and tapped into a variety of, not only experiencing it through his fingers, but leaving his signature mark on them before he finally landed in to play and ace the rock metal domain.

Besides his natural brilliance and learned expertise, the credit for the nuances and variety of his techniques can also be accredited to the equipment and instruments that he plays. From the Kramer, BC Rich, Mason Bernard, Peavey, Washburn Mercury Series, Carvin, and Ibanez guitars to DiMarzio and Seymour Duncan pickups, and from GHS and Ernie Ball Strings to Peavey, Rockman, and Hughes and Kettner amplifications, Tony MaCalpine’s fingers have befriended an extensive myriad of instruments over time, and a chronology of his releases and discography clearly indicates his passion for experimenting with new equipment and chords.

Some of the most notable highlights on his professional career include ‘Eyes of the World’, ‘Premonition’, ‘Madness’, ‘Evolution’, ‘Chromaticity’ as a solo, ‘Universe’ Live from Oz’, ‘Moon Babies’ with Planet X, ‘Cab Saga’ with the CAB, ‘Ring of Fire’, ‘Edge of the World’ with Mark Boals, ‘Live at Astoria London’, ‘G3: Live in Denver’, and ‘G3: Live in Tokyo’ with Steve Vai.