We all read articles about how the younger generations aren’t interested in learning to play a musical instrument. Instagram is a good place to go and see 60-second clips of everyone who thinks they can play guitar.  I’ve followed Sophie Lloyd for a while on Instagram and she has an established following where she plays covers and puts out original music.  I came upon another Sophie, Sophie Burrell.

At the young age of 19, Sophie has amassed 32+ thousand followers on Instagram playing along to covers.  She has a bright future ahead of her with new endorsements, teaching guitar and a new band.

We spoke to Sophie to learn more about her.

SB:  I started playing guitar when I was only 9 years old. I watched the movie “School of Rock” when I was about 5 and from then on I knew EXACTLY what I wanted to do with my life. My parents got me this plastic toy guitar when I was only 5 and I remember working Smoke On The Water out by ear, I was so proud of myself.  I went bounding into their room to show off my mad shredding hahaha. Later on, when I was around 9 my mum finally gave in to my pestering and found me a guitar teacher to start learning from.

How did Saints of Sin form?

SB:  Saints Of Sin formed back in 2013, Sparxx and Ash are brothers so that’s how that connection came about…they went to school with our drummer, Josh. The boys formed a band called “Mothership” with some other musicians, prior to the formation of SOS. Mothership had run its course and the three of them were on the hunt for a new band.
Josh went to university and met our crazy frontman, Rui…so he jumped on the wagon too!
I actually joined Saints Of Sin quite late, I say that but 2 years have already zoomed past since I joined. There was another guitarist before me, however, when the time came and SOS were on the hunt for another guitarist again they kindly thought of me!

Confession time, I was actually quite a Saints Of Sin fangirl when I was younger. I’d known the guys since I was 13 years old and was actually at their first ever show. They knew that I was a guitarist and asked if I wanted to “try out” for a few months, things were going really smoothly so I officially joined!

As you’ve said you’re in the process of writing an album with SOS.  Who’s writing what for it?

SB:  We are indeed! The main songwriter in the band is Sparxx, he’ll bring skeleton demos to us and we’ll all put our ideas together to bring the song to a finished piece! We push each other to our creative limits to come out with the best results we can. 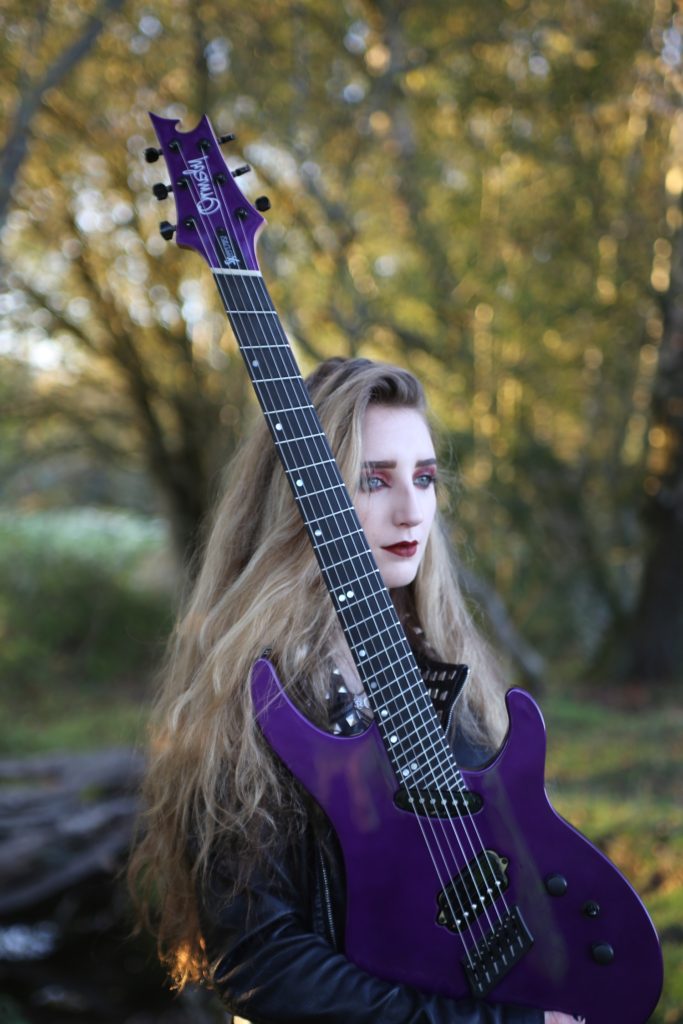 What brand of guitar do you have a preference over?

SB:  I play a lot of different brands when it comes to guitar, we have a ridiculous amount of different guitars in our house as my partner is a guitar technician and luthier, I’m a live musician and guitar teacher so you’ve gotta have some ammo!
I’m not sure I could give you a brand preference as I love all of the guitars we have for different reasons! It really depends on the mood I’m in and what I’m playing, for example, if I’m feeling bluesy I’ll pick up a strat, if I want to play metal I’ll pick up the Ormsby.

Who are some of your influences?

SB:   I’ve been heavily influenced by a huge variety of musicians from a young age, my earliest influences were Pink Floyd, Black Sabbath, Led Zeppelin, Avril Lavigne, and Guns N’ Roses. At the moment I’m influenced by SO MANY different bands/artists! Some of my current favorites include Richie Kotzen, Mark Tremonti, Slash, Myles Kennedy, Periphery, Zakk Wylde, Synyster Gates, John Mayer and many more.

Who are you endorsed by?

Are you touring at present?

SB:  Right now we’re working really hard on getting the finishing touches all complete for the album and its release. We plan to do a tour across the United Kingdom over the summer season! Keep your eyes peeled for dates!

Do you write the music or lyrics first?

SB: Personally, I write all things musical first, lyrics are my biggest weakness when it comes to songwriting!

SB:  My plans for the rest of 2019, that’s a tough one…if only I could see into the future haha!
The release of our second album is what I’m most excited about right now, so the release and the tour/press to follow is what I’m looking forward to most!
I’m going to try harder than I ever have to grow my social media presence this year, I’d like to dedicate more time to releasing YouTube content as I really enjoy doing that.
I’d love to start working on some solo material as I’ve neglected to do that for quite a while now, people are asking for it!

I’d also really love to get down to some more guitar/music shows such as NAMM and the International Guitar Show, meeting likeminded people is what I’m all about.

Any plans to come to the US?

SB:  I’d love to come to the US, the dream is to get out there on a tour of course! It’s definitely the plan to do so in the long run…getting there is the hardest part.

For more information on Sophie please visit the following links: