Today Seattle metal legends SANCTUARY are joining label mates ICED EARTH on an extensive tour of North America and Canada. As previously announced, following the unfortunate loss of one of metal’s most revered vocalists, Warrel Dane, these upcoming shows will act as a tribute to his musical legacy with guest vocals to be performed by Joseph Michael (Witherfall). In addition to that, SANCTUARY has now completed their line-up with Joey Concepcion (Armageddon, The Absence) as the second guitarist.

“We’re proud to announce that master shredder Joey Concepcion will be joining us on our 2018 US tour honoring our brother Warrel Dane,” says guitarist Lenny Rutledge.

Joey Concepcion adds:
“I’m very stoked to be playing with SANCTUARY on their upcoming tour, I’ve been a fan since I was in high school listening to “Into The Mirror Black.” I’m looking forward to playing these songs live and honoring the legacy of Warrel Dane.”

Regarding the tour, Lenny Rutledge states:
“SANCTUARY has decided to continue with the ICED EARTH tour to pay tribute to our brother Warrel Dane. The set will consist of many old and some newer songs performed with the utmost respect and quality to honor our friend. Please join us in this farewell as we celebrate Warrel’s musical legacy with SANCTUARY. We look forward to sharing this tribute with all of you.” 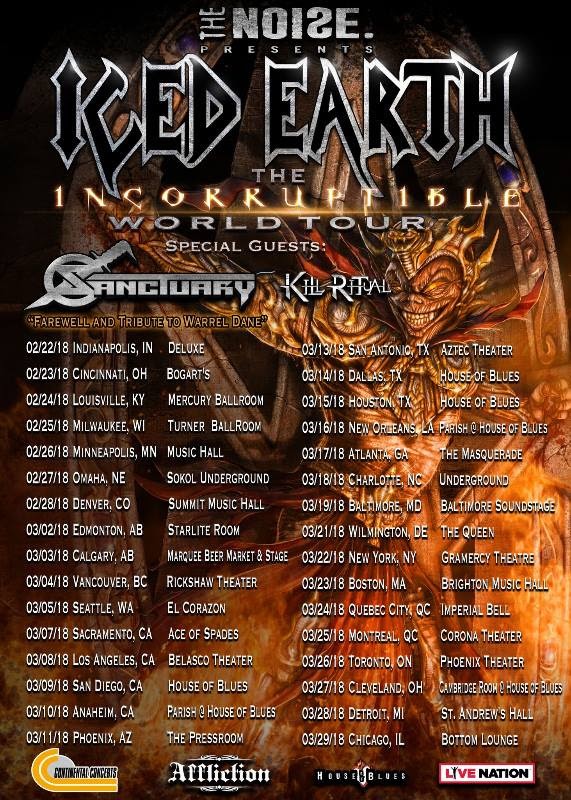 Formed in 1985, SANCTUARY was signed to Epic Records with the help of Megadeth guitarist Dave Mustaine and released two records, “Refuge Denied” (1988) and “Into The Mirror Black” (1990). The band disbanded in 1992 as members Warrel Dane (vocals) and Jim Sheppard (bass) went on to form the highly successful metal act Nevermore with acclaimed guitarist Jeff Loomis. SANCTUARY reunited in 2010 and appeared at several festivals worldwide before returning to the studio to record their acclaimed full-length comeback album “The Year The Sun Died” for Century Media Records in 2014.

Warrel Dane tragically passed away on December 13th, 2017 due to a heart attack while recording his second solo album in São Paulo, Brazil.