Arch Enemy has unleashed their DVD, ’As the Stages-Burn’’ in March 2017, celebrating their 20th anniversary. The new DVD would feature their world’s largest stage performance till date from their Wacken Open-Air set in Germany.

”As the Stages Burn” marks the era of the Arch Enemy’s War Eternal cycle; the bands first ever record with the former Agonist vocalist Alissa White-Gluz. Also earlier this year, they decided to give all their fans a DVD named War Eternal Tour- Tokyo Sacrifice, but then the Wacken set seemed to have much more impact than the previous releases.

The stage was all set, to begin with, the performance of the lifetime. The decoration was perfectly put together, just like the original Arch Enemy. The band started with a very energetic and impactful song “Yesterday is Dead and Gone” by Alissa which brought the crowd to their feet and it seemed that they are quite enthusiastic and were looking forward to more. 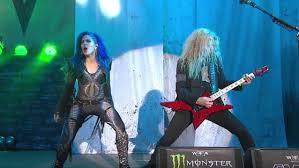 Arch Enemy has done a great work with the DVD and has given an outstanding performance on the stage. The main criteria for the whole performance were to keep the fans involved throughout the show and they did it pretty well. The song choices and the changing backdrops at the end of every song made it even more mesmerizing. The energy and the solo from Jeff Loomis set the stage on fire and what else could anyone have asked for that night. “On This Special Night” as sung by their vocalist Alissa was completely flawless over the stage. She totally pumped up the crowd once again and made them go gaga with the whole flow of the song, jumping, clapping and singing along with her until the entire song was over. The band was totally on the minds of the crowd leaving such a huge impact on them.

The DVD that captures their entire performance as a masterpiece is probably what you need to experience the true magic of this band. It was a perfect recording of the whole performance from the music to the shots of the band lined up quite well. One could just feel the best of the live show even through the DVD because of the amazing picture quality and the camera movement all across the stage; moving very smoothly without any break of shots.

The strongest choice of the entire performance “We Will Rise”, is an amazing and powerful song towards the end of the show. They chose to end up the performance by “Fields of Desolation”, an amazing way to end the set.

Guitarist Michael Amott told Spark TV that that was indeed the perfect album cycle to document. He added that it was a fresh piece that had taken them over two years on the roads preparing and that it was time to piece it together and see how the audience would take it. He was also quick to remark how special the show at Wacken was and that among other things, it was one of the biggest things to look forward to on the album.

This live DVD includes behind the scenes footage of the band and videos from the War Eternal Album.  This is a flawlessly executed DVD and one of the best I’ve seen.  9/10 stars.