Sin Quirin is a two-time Grammy nominated guitar player from LA. Sin is a member of Ministry and a primary songwriter on the 2007 Ministry album The Last Sucker and 2013’s From Beer to Eternity. 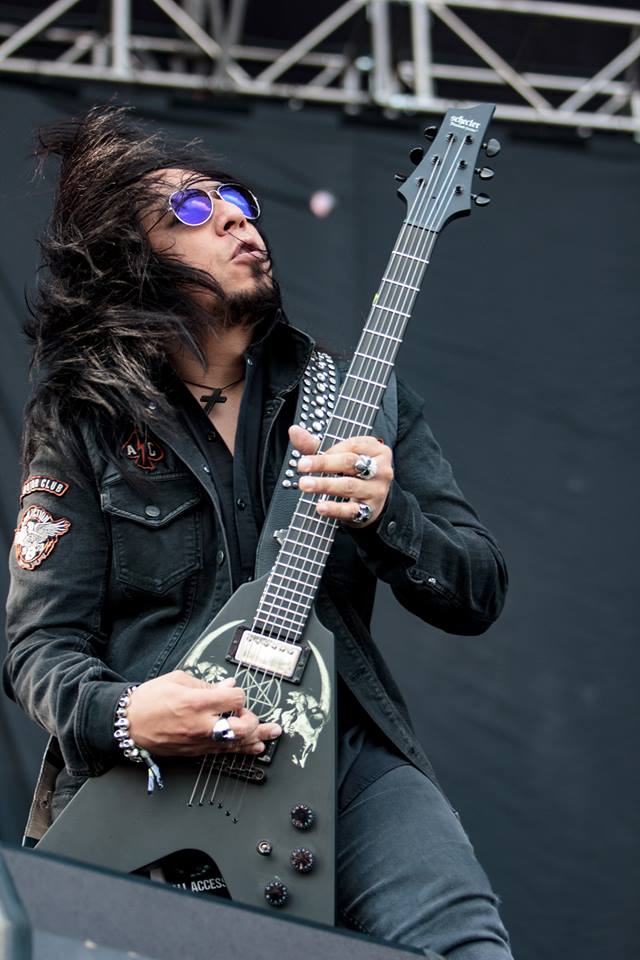 Sin, Hope you’re well!  What’s going on with you and Ministry these days?

SQ:  We just got back from a European tour in June; The new record is done. And we’re going back out on the road we have a US tour that starts mid-October to mid-November.  First I heard the record is going to be out in October, but now I’m not sure if it will be out in October or if it will be out in early 2018, but the record is done.  It’s already mastered, and it’s ready to go, but I’ve heard a couple of different things from management on when it will be released because there is a whole label thing that they’re dealing with right now. But then we start all over again in 2018 we’ll get another world tour happening, so we’re still busy.

Can you say which label you’re talking too?

What I can say is what I’ve been hearing from the people that have heard it is they keep saying that it’s a combination of the Dark Side of the Spoon, Filth Pig and Psalm 69. So it’s a slightly slower vibe than what we’ve been doing the last few records, but it’s equally as heavy but just not as fast if that makes any sense. It’s still very dark and has a just ominous vibe and feel to it. So it’s it’s along those lines.

What is the writing process for the band?

Al does all of the lyrics in Ministry. When I first came into Ministry in 2000 I mean, I was in Revolting Cocks in 2006 and then into ministry. Right after that. I helped co-write the Last Sucker. Back in 2006-2007. Basically, I would show up with riffs and ideas, and then we would just work them out in the studio. On this album I mean it was a little bit more of a band effort than in the past few records. I came up with song ideas Caesar came up I think with one or two. I think Jason did as well and so we all collaborated with Al on this. So it was more of a band vibe on this album. 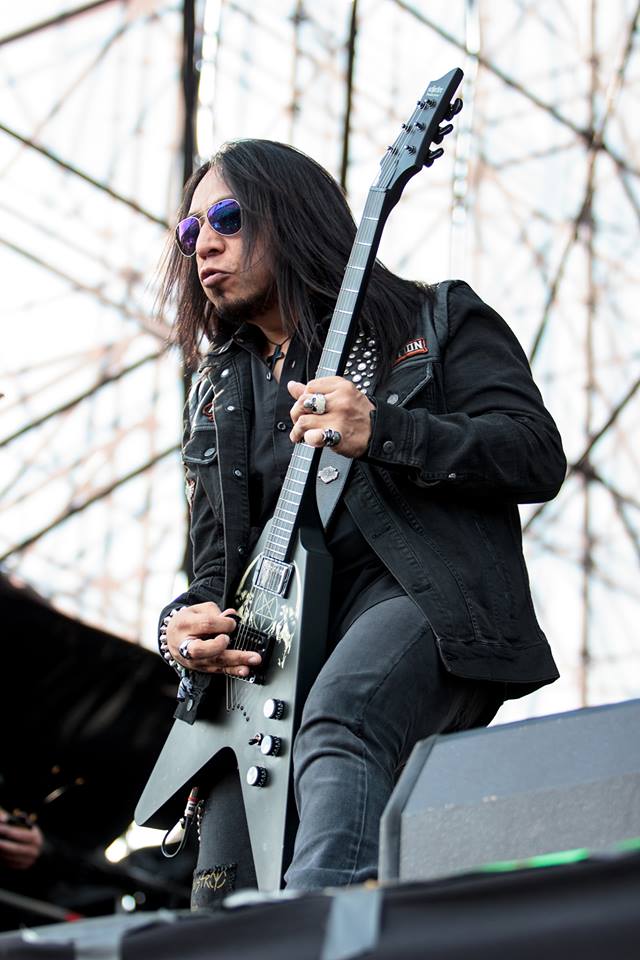 As far as writing process is the same. It’s weird in how I have like I’m always writing so I’m always tracking and demoing stuff and I always like sort of catalog things like okay this could be a ministry you know the song or whatever. So I always have a handful of those in my arsenal.  So when it was time to start writing for this record I had a couple of ideas already tracked. So I just showed up with those and they ended up on the record. But then at the same time, there were days where I would come to the studio with nothing. And by the end of the day, we would have a new song idea. So we do it either on the spot or sometimes we show up with an idea already in hand there’s no real set formula to how we go about making records a lot of it is managed just on the spot sometimes.

What side projects do you have at present?

SQ: The latest one that I’ve got is a project called Three Headed Snake, and that’s that’s kind of like my just fun project you know I’ve wanted to do for a while, and it’s very old school. Power metal kind of stuff is nothing like Ministry at all. My singer Johnny Ray.

He’s just an amazing vocalist and so we’re set to go into the studio to track in the E.P. in the next month or two, and we hope to have it out before the end of the year hopefully. But it’s just an old school power metal you know project that I’ve been I mean like I said wanting to do for a long time and it’s just me touching on my old metal roots of you find out when I grew up in L.A. listening to you know bands like Warrior,  Malice, and Loudness.   it’s a lot of heavy guitars, but it’s just like old school power metal.  It’s not like every time I do a project for some people always think that I’m doing like an industrial thing and this is not the case at all.

What happened to Super Manic?

SQ:  It’s kind of on the backburner simply because we all got so busy. Charles Mosabo, the singer he had moved here from France when we first started working together, and he’s an incredibly talented producer and him just I mean swamp in the studio all the time. He began working and writing and producing bands for their on Epitaph Records, and he’s just become insanely busy with that. So you know we might go back to that at some point we talked about it all the time. He and I are still in contact, and it was a fun side project that we that we started and we might go back to it if schedules permit. You know at some point it’s come down to a scheduling thing you know with a lot of the stuff nowadays. So it’s tough just to have found the time to do everything that you want to do, and you have just to prioritize things and try to make time and find time

Walk me through your rig

SQ: I’m endorsed by Blackstar amps and by Schecter guitars. My main rig is a Blackstar Series One hundred watts head or two hundred watts had depending on you know the size of the place that I’m playing at. So it’s always Blackstar Amplifiers. My main guitar is my signature series Schecter Sin Quirin V-1 EMG pickups 57/66 in there. It depends on what I’m playing with Ministry my pedalboard consists of my Digitech whammy my Dunlop crybaby wah pedal MXR carbon copy delay.  I use with the ministry of my old Ibanez Bi chorus pedal from the 80s. 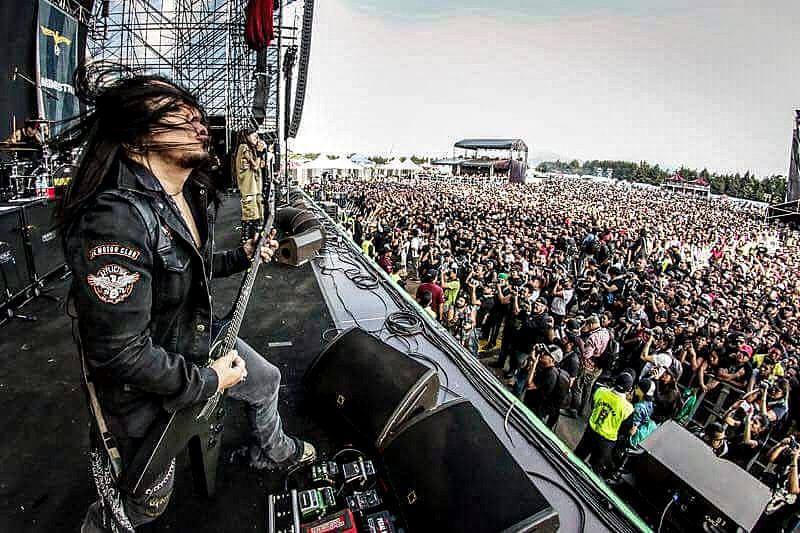 SQ:  I’ve got a DJ gig in Phoenix September 2nd and also that day I’m going to be doing a guitar clinic slash meet and greet at Zero Records in Phoenix that afternoon.  That’s Saturday, September 2nd in Phoenix. So guitar clinic in the afternoon and then a DJ gig that night and I think it’s called the Fetish Ball in Phoenix Then September 15th Ministry is playing Riot Fest in Chicago with Nine Inch Nails and New Order and a bunch of bands.

U.S. tour that starts October 13th. I want to say in Worcester Massachusetts. Yeah. And then it goes through I believe November 12th I think it ends in in Austin Texas.