Manhattan-born singer-songwriter, Madame Mayhem is a genuine rocker with an eclectic style in every aspect of life. With her ‘in your face’ attitude, Mayhem is the right word to describe this extreme artist.

Madame Mayhem just released ‘Ready For Me’ that she co-wrote with producer / co-writer Corey Lowery (Saint Asonia), Clint Lowery (Sevendust) and mastered with Ted Jensen at Sterling Sound studios in New York City. With hard rock roots and melodies that show off her vocal range, Mayhem is excited to bring these new songs to the masses.

I spoke with Madame Mayhem before the tour with Sevendust starts this Saturday.

When did you realize you had such a voice that you do?

MM:   I studied opera growing up and musical theater, I was a mezzo, but I have a pretty high octave range. I don’t always get to use the entire full variety of my voice in this music.  I can sing low and sing real high. I grew up singing opera in music theater. When you grow up in the New York City area, that’s the majority of things we can do as a kid.  We didn’t have a School of Rock or stuff like that are all over the place now, which I think is cool.   I started as a musical theater kid, and I learned how to sing and dance at a very young age and then continued to go to college from there and continued to lear. I’ve always been a metalhead.

When it came time to pick a real career, I was like what are you going to do with the music degree because there’s not much you can do except music. All I want to do is music, write music and create music, being a rock band and play.  That’s how it happened.

Ready For Me Was Produced by Corey and Clint Lowery.  Is Clint going to be doing double duty playing guitar for Sevendust and you on your tour with them?

MM:  No, we have a great lineup of guys that will fill in for the guest musicians that were on the record.  These guys bring the songs to life.  It’s going to be exciting while on tour with Sevendust that Clint will be able to hear the songs we created live.

Do you have a favorite song on Ready For Me?

MM:  I always say if anyone wants to know more about me and figure out my deep dark secret and what makes me tick, all they have to do is listen through Ready For Me.  I was very comfortable writing, and I was going through a lot of stuff at the time, a lot of frustrations and I let it all out on the album.  Every single song is super personal to me. One fun song is War You Started, which we have a music video out now for. and we’re going to do it in our sets of course for this upcoming tour for both headlining shows and the opening shows that we have.   It’s a great song and the first one on the record.

You’ve been on tour with some big names.  Is their one that sticks out the most?

MM:  I think on every single tour It’s been great. I’m lucky to say that I’ve had great experiences for the majority of the time, The most recent one we did when we were in the UK and Europe, we got a bus with Fozzy, and we were opening for them, and it was so much fun.  Those guys are so talented, and it was so fun to watch their shows, and we shared a guitar player most of the time.  It was great to have that kind of connection and just to be able to tour the UK and Europe and be able to watch them every night.

You went on tour with Doro recently.  What did you learn from her?

MM:  When we were on the road with Doro, it was terrific. Besides the fact that we all got along so great.  Doro was the most fun person, one of the most genuine people I’ve met and she’s so talented.  The way she interacts with her fans is fantastic.  She’s so real.  She spends as much time as she can, and it’s so personal to her.

It was so comforting and refreshing watching her how she interacted with her fans.  It gave me a boost to be like you can still be the best musician, rock chick, metal chick and be this kind and awesome person.  You don’t have to pretend to be something you’re not.

Aside from your tour with Sevendust, what else do you have planned for the rest of 2018?

MM:  We’re working on more upcoming dates, so I would tell people to check out our Facebook page or website.  We are going to Bulgaria for the Hills of Rock Festival to be opening for Judas Priest.  I’m beyond excited for that. So stay tuned for more dates. 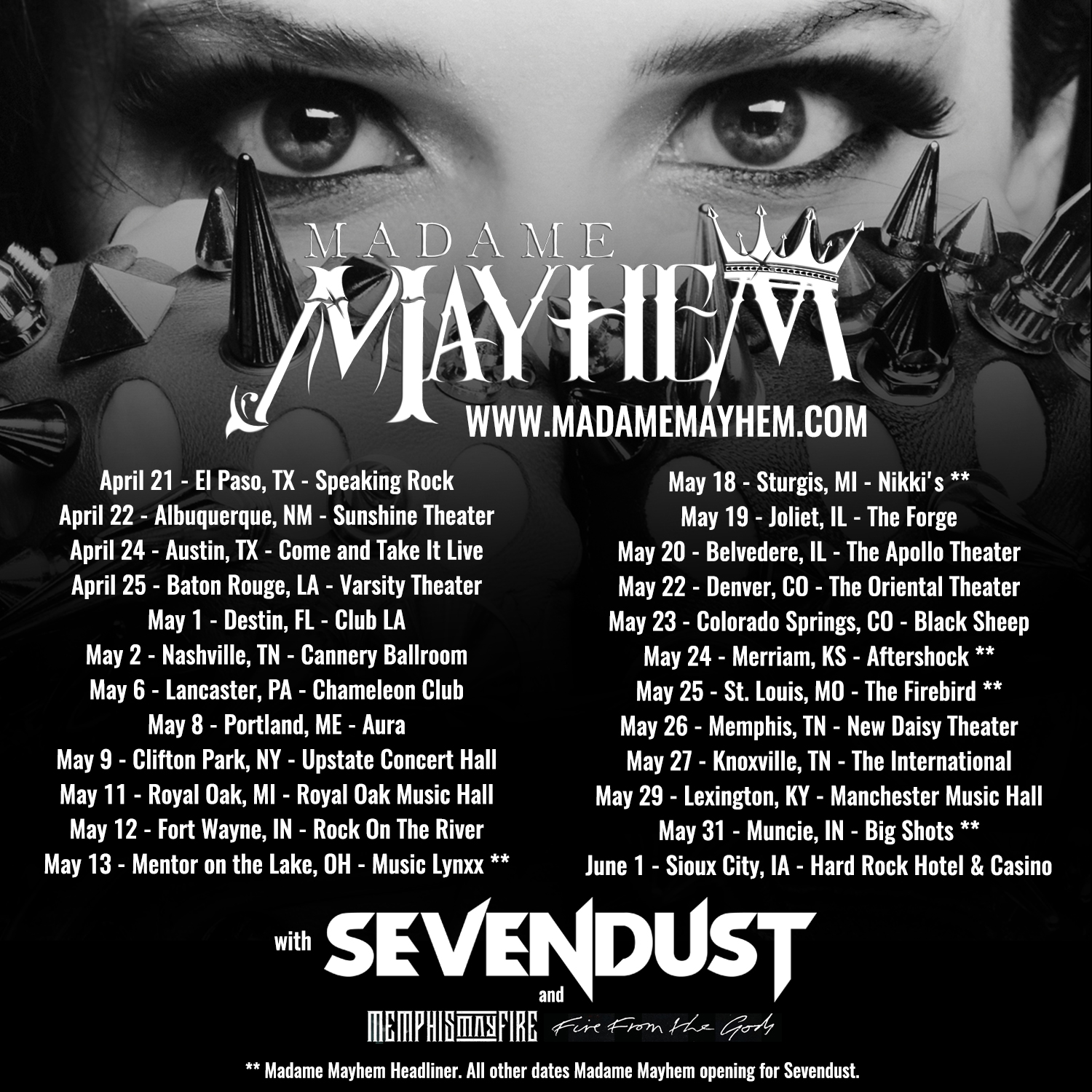