What are you up to these days?  I see Dark Lord is coming back?

AM:  Yes, I’ve resurrected Dark Lord (my very first band back in Italy in the 80s) after a few European promoters asked if it was possible to get the band back together, it’s me and Red from the old days, he switched from drums to lead vocals and we got Tony on drums and Dave on bass. The intent is not to recycle the early numbers and do a nostalgic trip like so many other reuniting bands seem to do these days, I’m only interested in new material, we’ve been playing around quite a bit during the summer out in Europe and audiences are digging it. Other than that I’m planning a new solo album which will be another departure from what I’ve previously done, different approaches, ideas, etc

Are you teaching guitar?

AM:  I sometimes do, but I must admit I’m not the best teacher.  I’ve never been into set licks, and I have a very personal approach to how I relate to music and guitar playing, I avoid cliches and typical “music school” ways of thinking about music making, most people when they look for lessons are usually interested in learning licks, scales and to play like the musicians they like.  While it’s fun to learn this or that lick, I believe that type of approach ends up hurting whatever musical aspirations one might have. Guitar schools and Music schools, in general, these days seem to focus mainly on making everyone sound pretty much the same, capable of playing various styles with competence but lacking in personality, identity, actual emotion…

Attack of the Neon Shark is one of my favorite albums of yours.   Do you have a favorite record that you’ve done?

AM:  I rarely listen to my “stuff” except for when I’m working on it, but if I had to choose among my albums I would say Vertical Invader, the In the Name of…classical trilogy, Eternal Struggle, Late Nights at Desert Rimrock and my last two solo albums (Theory of Everything and Danger Zone) sorry, you’ve asked for one, and I gave you a bunch 😉 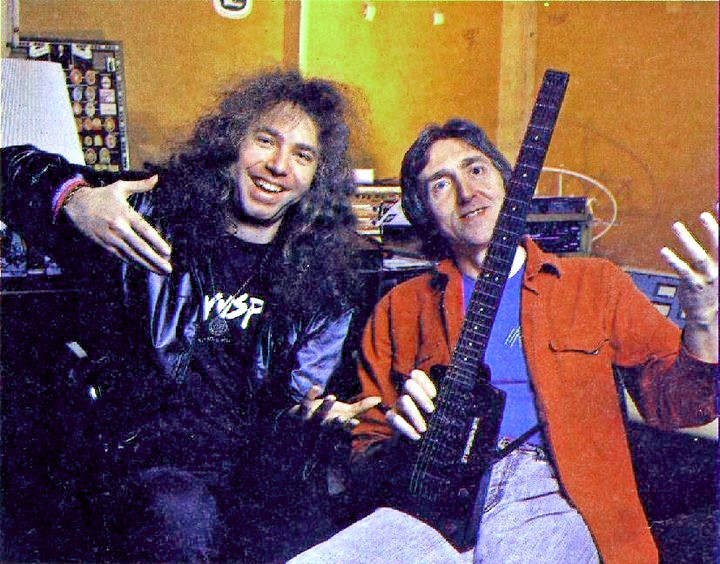 What does your rig setup consist of in the studio and while you’re playing live?

AM:  In the recent years I’ve slowly but surely decided to go as simple as possible, nowadays I’m just using a Multiamp head (made by DVMark) which is a digital amp containing effects, power amp, etc. I used to be highly skeptical of digital amps and simulators but thru the years out of necessity and various circumstances I’ve been finding myself using them more and more, of course one needs to tweak them and process them with a certain level of skills to get good sounding results, but since I’ve had the Multiamp I must say things have gotten a whole lot easier for me when it comes to live and studio set up…I get a lot more positive comments about my tone these days, especially during last summer tour with Dark Lord, massive sound with definition, clarity, and texture. As far as guitars I play my various Music Man of which I am an endorser, I think I have the best Music ManSilhouette ever produced, just a fantastic neck, to me the neck is most of the battle with a guitar…

How did you start playing guitar?  Who influenced you?

AM: My first instrument was the piano, then drums and finally the guitar around age 12. I picked it up mainly because I saw my classmate was pulling more chicks by bringing his guitar to school…true story 😉 Guitar influences have been many, Hendrix, McLaughlin, Gilmour, Blackmore, Page, Beck, Steve Howe, Fripp but then around age 13 I was given an album of a band called Tempest, Holdsworth was the guitarist, my whole view of guitar changed on that day…then Eddie Van Halen brought brand new meaning to playing guitar in a rock context. Another big moment for me was hearing Shawn Lane for the first time, equal to when I first heard Holdsworth. 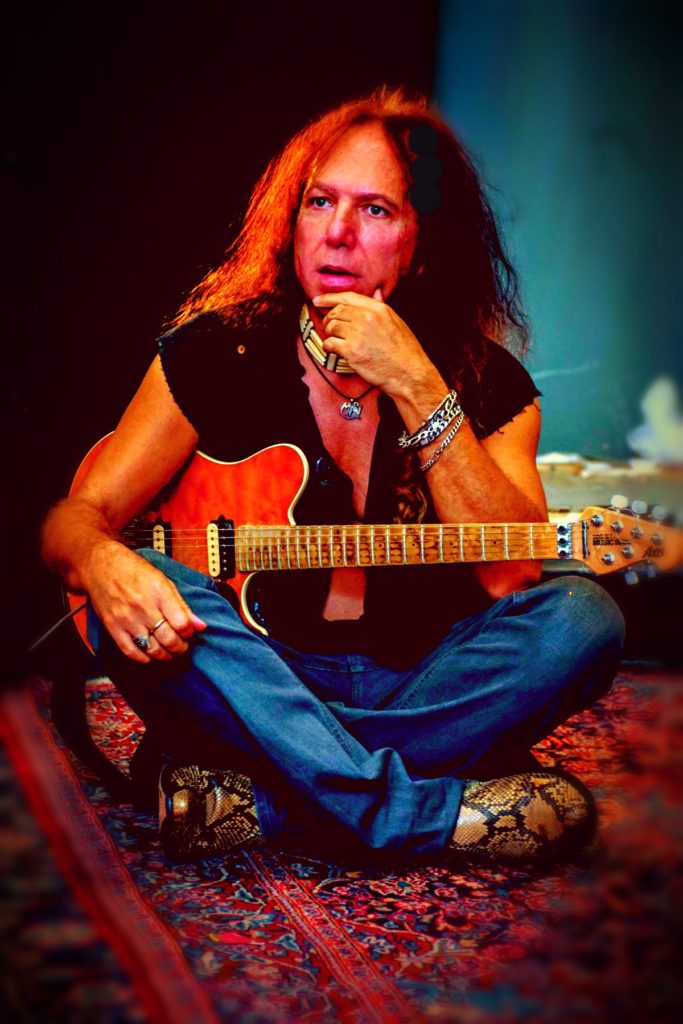 At what point in your career did you come to the US from Italy?

AM: I landed in Los Angeles for the first time in 1986 right after I concluded that (back then) I had reached a dead end where I was (Europe) and to progress, I needed to go somewhere else. A record label from LA offered me that opportunity which I gladly accepted.

The music industry today isn’t what it was in the 80’s.  How are you adapting to the ever-changing industry?

AM:  The word “adapting” doesn’t give the full idea of the impact these times are having on someone like me who’s not part of the mainstream…it’s been brutal, and it’s progressively getting worse. Generally speaking, the general dumbing down of the audiences perpetrated by labels, social media, etc. has made it, so anyone offering anything that’s slightly off center has ZERO visibility which translates to a constant struggle just to survive. On top of all those issues add the fact that due to some mistakes I’ve made in the past due to my naivete’, I’ve trusted managers and labels that in the long run turned out to be thieves…small example, I haven’t been receiving any royalty payments for years now for some of my best selling records containing the music I wrote while other peripheral entities have been and still are receiving payments deriving from that material…and it goes on and on. Now I’ve decided to go the crowdfunding way to finance my next album; I think detaching from third parties such as labels is the best thing I can do at this point. 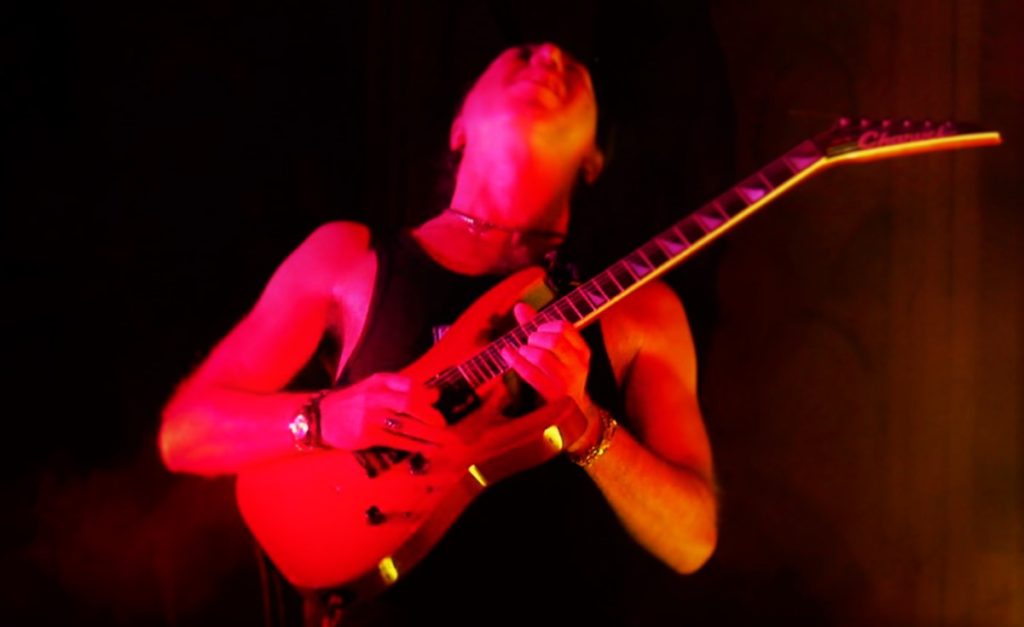 There are many people in the guitar community that are saying the new up and coming guitarists have no feeling and just noodle on the fretboard.  Do you agree with that?

AM:  It’s based on some truth, as I was saying earlier, in recent past there’s been massive proliferation of “music schools”, “guitar schools” etc that tend to homogenize the way people view making music by teaching standard approaches that leave no room for identity and personality, couple that with the thousands of instructional videos available online in which the emphasis is placed just on physical moves interspersed with theory (sometimes) and the total lack of attention given to what musicality and being creative means…some of the best musicians were self-taught…when one is forced to learn stuff on his own he comes up with very personal ways of tackling the instrument, even gaining a piece the wrong way can trigger a different way of approaching music that, in the long run, along with other elements, can be part of developing an original voice on the instrument. I have to be honest; I won’t make any names but some of the highly celebrated new players I’ve been seeing on the guitar scene today leave me cold…Sure, they can play proficiently in any given style, but for the life of me I don’t hear anything that moves me deeply, but that’s just me, an old fart speaking 😉

You said you’re currently not receiving royalty payments for some of your records.  Are they your earlier albums you did?

AM: I was on Metal Blade Records. Yes, I haven’t been getting any royalties for those albums, the single “God Promised a Paradise” is still played on VH1 sometime and around the world on various TV and radio stations.

It is a bit complicated, when I first arrived in the US I was just on tourist visa, couldn’t legally work here, so my manager at the time made me sign a document in which I was giving him authority to sign checks, contracts, etc. on my behalf…when I recorded those Metal Blade albums all the contracts were handled that way, including publishing etc…back then my bills etc were being paid by the manager and label thru recoupable advances.  Fast forward a couple of decades and those contracts still stand although the advances have been amply recouped…producers, managers and labels associates figure as co-owners of my BMI catalog and when one looks at it it’s there in plain sight: everyone gets a percentage while Alex Masi receives 0%, I am not kidding!

AM:  More recording and gigging with my boys in Dark Lord over in Europe and getting down to business for my new album here in the US right after the crowdfunding campaign is completed, I expect the recording to be finished by June 2018. Thank you!