Profoundly Unique, Highly Eccentric, and Imaginatively Futuristic are just some words to describe “Colonizing The Stars” the killer new album from world acclaimed composer and guitar virtuoso George Bellas out on February 22, 2018. Colonizing The Stars contains nine epic compositions in a futuristic style with a palette of lyrically-ﬂowing melodies, otherworldly harmonizations, and inventive rhythms all sounding through a barrage of guitar, bass, drums, choirs, and orchestral instrumentation. Forget everything you think a song should be.  virtuoso 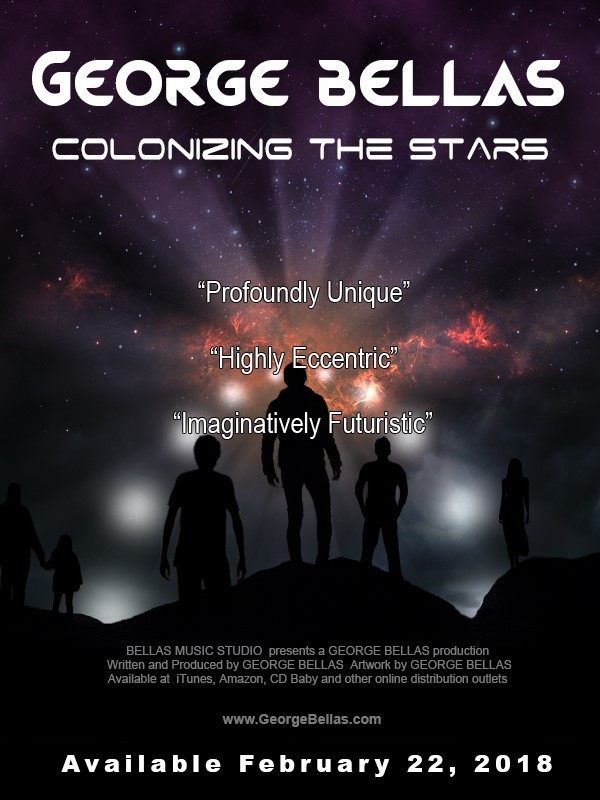 There is a lot to listen to on this album. The music is visionary and very deep with dense polyphonic textures weaving in and out over a myriad of outlandish meters and rhythms. The melodic content is very lyrical and ﬂowing in which all instruments at some point execute. There is only a single guitar used throughout the entire album, meaning absolutely no double-tracked guitars were recorded. Using a single guitar was an effort to leave room on the soundstage for the choirs and other instruments and also to situate a dedicated location in the stereo and frequency spectrum. A full range of choirs was used, including a boys choir, girls choir, sopranos, altos, tenors, and basses. The style of writing is exceptionally unique and in a class of its own. The organization of the album is in a symphony sonata cycle with three cycles containing three movements each. Each three-movement cycle is in the format of Movement 1 – Fast, Movement 2 -Slow, Movement 3 – Fastest. Each cycle utilizes modiﬁed forms of Sonata Allegro, Minuet and Trio, and Rondo. George is against the modern day trend of cramming as much volume onto a recording as possible and has produced a more dynamic release with this album, “Sonically, as with my previous two albums, I wanted to retain the full dynamic range of the recordings. So, during the mastering stage, no peaks were removed, which kept it very clear, dynamic and spacious sounding when played loud.”

Inspired by modern and futuristic scenarios of humankind’s existence alongside artiﬁcial intelligence and the need to colonize the stars to prevent the extinction of the human race. Envisioned in a time where the human species is living and breeding in new worlds throughout the universe, where entirely new languages and human form and cerebral abilities have evolved. Traveling to distant stars has been accomplished using a technology that encapsulates and transports human DNA along with eons of collective information to the outer reaches of the cosmos within light waves.