Long running Grammy-nominated extreme melodic power metal band DragonForce releases their seventh album, ‘Reaching Into Infinity’, on May 19. Once again recorded with Jens Bogren (Opeth, Katatonia, Soilwork), the producer extraordinaire who helmed the UK-based group’s now three-year-old previous record ‘Maximum Overload’, it will be available via earMUSIC in Europe, Metal Blade Records in the United States and Roadrunner in Japan.

‘Reaching Into Infinity’ introduces Italian drummer Gee Anzalone, who joined the band for their first ever ‘best-of’ collection, ‘Killer Elite: The Hits, The Highs, The Vids’, released in 2016. It’s the third DragonForce album to feature frontman Marc Hudson, whose reign at the mic now enters its sixth year. 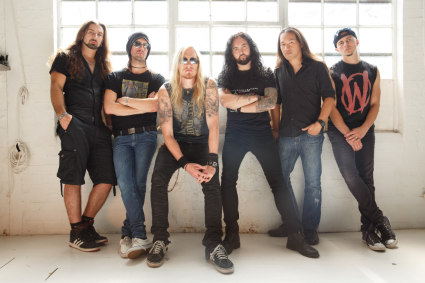 “Marc is becoming more and more involved with the writing process, especially in the lyrics,” acknowledges guitarist Herman Li. “Mostly, though, these songs came from Frédéric [Leclercq, bassist] and Sam [Totman, guitarist].”

Musically speaking, ‘Reaching Into Infinity’ continues where DragonForce left off with ‘Maximum Overload’, the band’s faster material becoming even faster still, while the melodic parts head even further in that particular direction. The band offers no apologies for the inclusion of a 1980s rock-style ballad entitled ‘Silence’ and, at the other end of the spectrum, there’s even an 11-minute multi-tempoed monster called ‘The Edge Of The World’.

“‘The Edge Of The World’ is DragonForce’s longest ever song,” says Li proudly. “In some ways, this album is more epic than anything we’ve done before.”

‘The Edge Of The World’ is extremely ambitious, channeling growled vocals from Hudson and fusing them with a stunning arrangement that twists and turns like the proverbial dragon’s tail. The ’Force go prog-rock, anyone?

“Why not?” Li responds. “Marc’s favorite style of music is prog, and I’m a massive fan of Dream Theater, so there’s an element of that going on. With each album that we make, the band reveals more and more if its influences, constantly adding to what we can do.”

“We have proven that playing fast is something we were good at, so this time I wanted to bring even more diversity into our music,” Fred elaborates. “It’s great to challenge ourselves instead of staying in a comfort zone, and I really wanted to experiment with Marc’s vocals. I think people are going to be surprised at his brutality.”

The title corresponds with the album’s highly impressive sleeve art, which features a dragon bursting through a wormhole into a hi-tech, futuristic cityscape.

“The dragon represents us – DragonForce – and a form of music that’s been around for a very long time, emerging into an outside world that’s infinitely more crazy and chaotic than it was ten years ago,” Li explains, using a considerable understatement. “Everyone is saying that there’s no future and there’s a lot of fear and uncertainty, especially for younger people, but our music is an escape from it all.”

The bulk of the album was laid down at Fascination Street Studios in Sweden, though additional parts were cut in studios around the UK and in California. They had to be – “Since ‘Killer Elite’ it’s been non-stop for us,” Li comments.

Adds Leclercq: “We flew out, played a festival, headed back into the studio, then went back out again. It was very intense and tiring. I obviously played bass but also a lot of rhythm guitar, electric and acoustic, and lost my temper a few times – I think we all did at some point because we wanted to deliver nothing but the best.”

Expect many of these songs to become firm live favorites, particularly the super-fast ‘Midnight Madness’ (feted as the album’s second video track), when DragonForce hit the road again. As usual, their itinerary will take them to the four corners of the world.