Riffmaster David T Chastain has re-released We Bleed Metal with some of the music re-recorded.  I caught up with the Shrapnel Records protege to discuss his new project.

What made you guys re-record portions of We Bleed Metal 17?

David T. Chastain: I live in a studio, so I am always experimenting around with new and old stuff. I like to jam over drum tracks and see what happens. Stian suggested that on the next album we lay down the drums first, so I just went ahead and recorded entirely new music over the drums on WBM. 100% new music. There is nothing the same as far as the guitar and bass go. This version is much more live sounding whereas the original 2015 version is a much more produced work. Both have their good points. Please see below for a more detailed explanation of the release.

How have you as a band evolved?

David T. Chastain: Since Mystery of Illusion until today I think we have maintained a pretty consistent “Chastain sound.” When Leather rejoined the band in 2013, it was as if we had only been apart for six months. We have a true working relationship that is quite surreal. I pretty much write in the same process as I always have, so I guess to me the main evolution has been the recording process. In the old days, we all had to be in the same studio at the same time and record more or less together. In today’s world, you don’t even need to be in the same country.

Leather Leone: The band has evolved into a recording project. We no longer tour, and It was a fluke that “Surrender To No One” and “We Bleed Metal” were recorded. Maybe we will do it again in 20 years.lol

Was there one particular issue you had with the old We Bleed Metal?

David T. Chastain: None at all. I know Leather loved the first WBM. As I mentioned I have unlimited studio time to experiment around with different ideas and I did a similar double release of another one of my bands, and it turned out interesting. On this new version of WBM, I wanted it to sound as live as possible. One guitar track only. So, in reality, it sounds much more like a live recording.

Leather and David, how did you get started with your respective instruments and how did Chastain get formed?

David T. Chastain: When I was growing up there was an old acoustic guitar around the house that was very difficult to play because the playing action was terrible. However, once I finally convinced my parents to buy me an electric guitar, I could begin to learn and play. I had another guitar playing friend, and we use to jam a lot which made me initially become a creator as opposed to learning songs by other people. I think that is why I can sit down and write an album in a day if I have to. Creating music has always been my thing not copying someone else’s.

Leather Leone: I started singing in church at a very young age….I can remember being so frightened but feeling so natural at the same time. So I continued.  I was introduced to David T Chastain through Mike Varney (Shrapnel Records). He had befriended me when I was in a San Francisco band called “Rude Girl.”

Chastain, of course, being a guitar virtuoso, was involved with Mike. He had mentioned he was interested in a female voice….you know the rest. 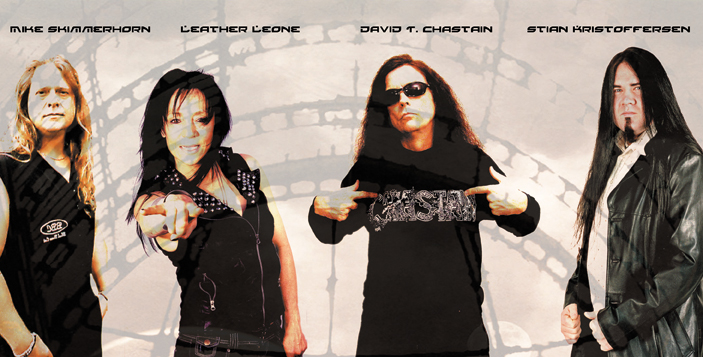 What is in store for the rest of 2017 for Chastain?

David T. Chastain: Obviously we are pushing all CHASTAIN albums. Earlier this year we released CHASTAINIUM which is a collection of all the albums published on Leviathan Records. From The 7th of Never to We Bleed Metal. The first time there has been a CHASTAIN album with both Leather Leone and Kate French together. Check it out at www.chastainium.com

It is quite an exciting release to have all of those albums represented on one album.

When shall we expect a new record?

David T. Chastain: With me you never know. It could be next year or maybe never. Just depends on how inspired Leather and myself become over the idea. Leather is releasing a new solo album probably in late 2017, and I know she is excited about that. As far as I go, it is a major undertaking to release a new album since I am the writer, guitarist, producer, and record company. We will see.

CHASTAIN‘s We Bleed Metal 17 is the next generation of the band’s 2015 Cd We Bleed Metal.  Guitarist David T Chastain explains the new release: “As everyone knows I don’t tour any longer and spend all of my time in the studio. So I experiment a lot with both new and old material. We Bleed Metal 17 has the same drums and vocals as the original We Bleed Metal, but it has 100% new and completely different music. An entirely different sound and feel from the original version. Also on most CHASTAIN albums, there are always at least five guitar tracks per song. However, on We Bleed Metal 17 there is only one guitar track per song. So this is a very live sounding release with actually more lead guitar than the original. This is as close as anyone is ever going to get to a high-quality live CHASTAIN album. There is one guitar, bass, drums, lead vocal and a couple of harmony vocals. Also, We Bleed Metal 17 has a very live sound with more drum room mics incorporated into the mix. You can hear Stian Kristoffersen’s drums more as they are front and center on this release without a massive wall of rhythm guitars taking up space in the mix.”

Returning vocalist Leather Leone adds: “This is my favorite CHASTAIN release since Mystery of Illusion!”

David continues, “As time goes on I have learned to enjoy the more stripped down sounds. In the early days sometimes there would be 20 guitar tracks on a song. Needless to say, it was impossible to replicate that live and a major reason I never liked to tour. To me, there was too much missing from the recorded versions for me to enjoy myself.”

Vocalist Leather Leone was the vocalist on the classic CHASTAIN albums: Mystery of Illusion, Ruler of the Wasteland, The 7th of Never, The Voice of the Cult and For Those Who Dare.  Leather rejoined the band in 2013 with the release of the impressive Surrender To No One. She has just recently toured Europe as a solo artist with her new Brazilian backing band being billed as “Leather Leone: The Voice of Chastain.” Leather is putting the finishing touches on her new solo album that should be out later in 2017. Leather adds, “The response has been fantastic on my live concerts! I have been signing autographs for 20-year-old boys whose parents had turned them on to us. They come up to me crying. The boys from Brazil are so blown away by our fans. Spain, Germany, and Sweden were crazy. I feel like I’m 20. The female fans are so hot, and the boys in the band love it!”

Also returning for We Bleed Metal 17 is original CHASTAIN bassist Mike Skimmerhorn who once again lays the foundation so that the rest of the band can explore and create.

Guitarist David T. Chastain states, “This one live guitar sound is something I have been used to most of my professional life in concert situations but never recorded a metal record in that format. We still have a foot in the past, but we are also embracing the future. I have my style of writing metal, and it isn’t ever going to change to any substantial degree. Leather proves she hasn’t lost anything from her glory days. Stian’s kicks the band to the next level, as he is the youngest member with the most modern influences. For me, this album is one of my favorite CHASTAIN releases in the catalog because it could be replicated100% in concert. I find myself being able to listen to We Bleed Metal 17 over and over.”

As the title track declares: “We will sacrifice and we will pay the price cause WE BLEED METAL!”