Mesmerizing the crowd with killer guitar riffs, doing solos at breakneck speed, and creating profound melodies with aggressive tugging of the guitar strings, Chris Impellitteri takes no prisoners on the fretboard. Impellitteri stands as a laudable figure of the neoclassical, heavy metal genre, and unfailingly carries the legacy of the legendary shredders before him.

Chris Impellitteri is one of those few names of the metal shredding genre who have proven themselves as an eligible and worthy heir to the legacy of eternal guitar legends such as Eddie Van Halen and Randy Rhoads. An honor and acclaim of this significance never come as complementary though. It should require immense talents, some exceptional command and penchant for non-conformity on a musician’s part to not just make a mark, but a breakthrough to demolish the status quo of the industry.

This renowned shredding titan started off his career in 1987 by co-founding the band Impellitteri with vocalist Rob Rock. After releasing their first EP, the band further expanded with the addition of various members.  Later in his career, Impellitteri reunited with Rob Rock and released Wicked Maiden and Venom.  Together the duo created some of the most aggressive neoclassical music to date.

The Leading Light of Post Randy Rhoads Shredvolution is also known as ‘The Master Shredder’ and as one of ‘The Fastest Guitarists in the World’. All these titles and awards and that too at the age of 54 tell a lot about the strength, status and the credibility of a musician like Chris.

Completely owning the genre that brought him this fame, Chris has not only contributed to the progress of the genre, he has also been imparting his acumen and expertise for the benefit of the current and coming generations of metal musicians.

Chris’s playing technique is pure and highly refined. His tones are well-structured, finely articulated to the core and stands a class apart in terms of the flow, speed, depth, nuances, and versatility. It is interesting to note that these unique attributes that have become his signature characteristics primarily stem from his self-taught learning approach. 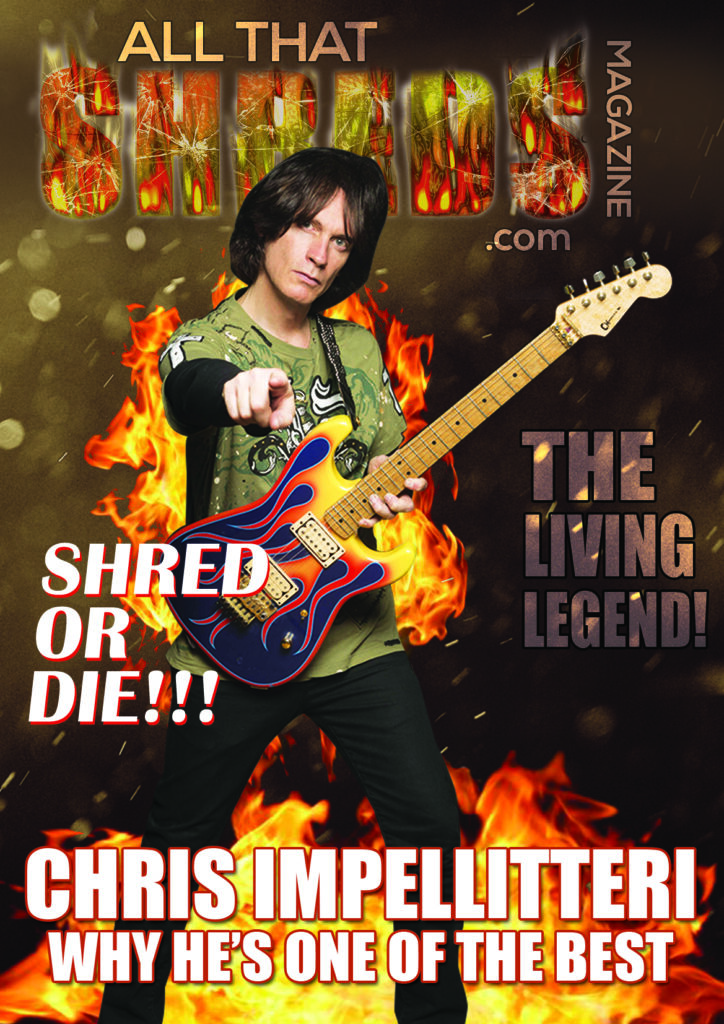 Having a music career that spans more than three decades, Impellitteri has released ten full-length albums and sold over two million records across the globe.  He has worked with some highly reputed names including Michael Wagener, the man who has produced big acts like Metallica and The Prince of Darkness himself, Ozzy Osbourne.

Chris Impellitteri was never satisfied by learning from the instructors and opted instead for his own high road. Plunging headlong into the pursuit of his passion, Chris tried his hands on a variety of instruments, playing styles, techniques, and that too in a multitude of genres and sub-genres.

This extensive learning has allowed him to build a strong grasp of rock and metal music. Being well-versed with the tact and intricacies of the chords, it has become a cakewalk for him to squeeze out tones, with extreme clarity, exuberant audacity and at an outrageous speed.

Talking about his ideas and role models, Chris claims to be inspired by several eminent musicians of the 1970s and 1980s decade. Some of his prime influences and inspirations include eminent names such as Randy Rhoads and Eddie Van Halen.

It takes a sizeable amount of talent, diligence, and perseverance to hammer out amazing lightning-fast solos rhythmically. Hence, it didn’t surprise anyone when a myriad of titles and acclaims came Chris Impellitteri’s way. Guitar One Magazine recognized him as the second-fastest guitar shredder. He was also featured on Guitar World’s list of fifty fastest guitarists of all times.  Aside from lightning fast speed, Impellitteri has an amazing feel, emotion, and technicality that seldom few guitarists possess.

The way Impellitteri shreds makes him stand out from the rest of the crowd. While his speed is unreal, the music is hi-octane melody. Chris Impellitteri’s fans know that speed doesn’t have to mean clamor and racket. They keep coming back to his records and shows for that unique mix of harmony and adrenaline rush. The speed of the riff and the soulful music goes hand in hand with Impellitteri’s compositions.

We welcome Chris Impellitteri to the All That Shreds Magazines Hall Of Fame!