Did you guys do anything differently this time around vers your debut album?

CB: Not so much. There were a few things that were mildly different, but I think the two of the most significant differences were the one that we had time for all of us to go back and listen to what we had worked on creatively and collectively.  We then would go back with ideas for editing, format, and structure. So we had more time to go back and forth and do that. 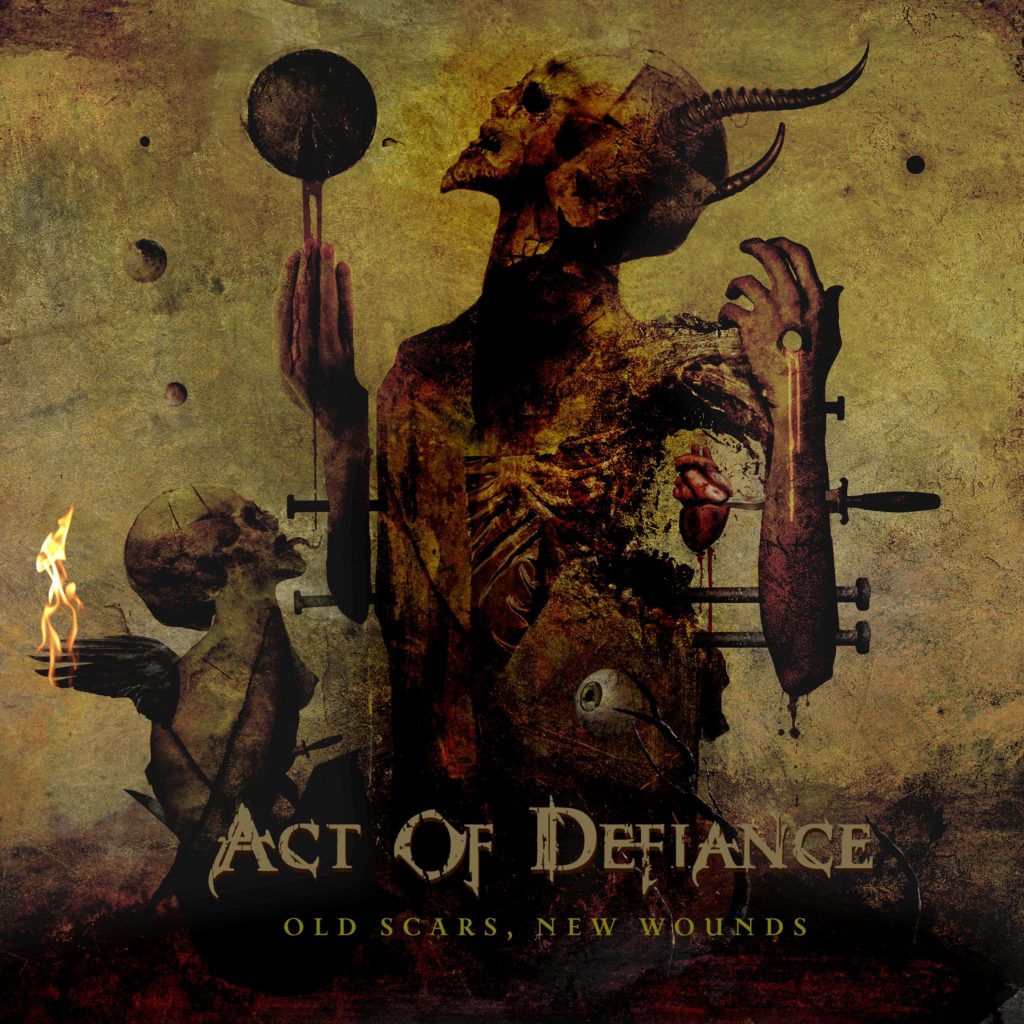 And then secondly Matt and Henry were able to do more writing. On Birth and the Burial,  Matt didn’t get any writing on the CD because he was so late to the game.  On Old Scar, New Wounds, he has credit for three songs. It was those significant differences.  It was much more collaborative.   The last album it is was all right we’ve got to get this written, form the band at the same time and get this out within four months.  Shawn and I were scrambling the whole way forming the group getting things set up trying to get a record deal because you find out when you form a band it’s not like OK now we’ve got a record deal.  We’ve got to go out and shop and try and get labels interested in.  We were doing all of that. On the last album,  everything was under the gun and pressure, and this time it was as much more hey we’re a cohesive band, and we write that way. That’s the most significant difference 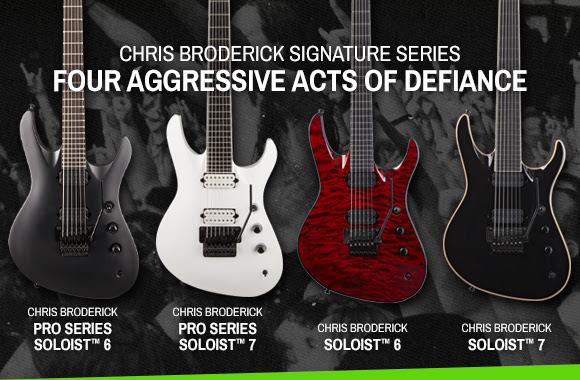 When it came time to shop Birth of a Burial to the labels, who was interested?

CB: There were a few others that were interested. I have my preference, and Metal Blade was it.  I’ve known Brian (Slagel, CEO of Metal Blade Records), and I know how he works with those bands. If you look at it the turnover rate of the artist and look at the turnover rate within his company itself, they’re very loyal there, they’re very fair, and they’re very level headed to work with. So I think that speaks for itself.  I knew that my preference would be towards Metal Blade but we did entertain other offers as well. 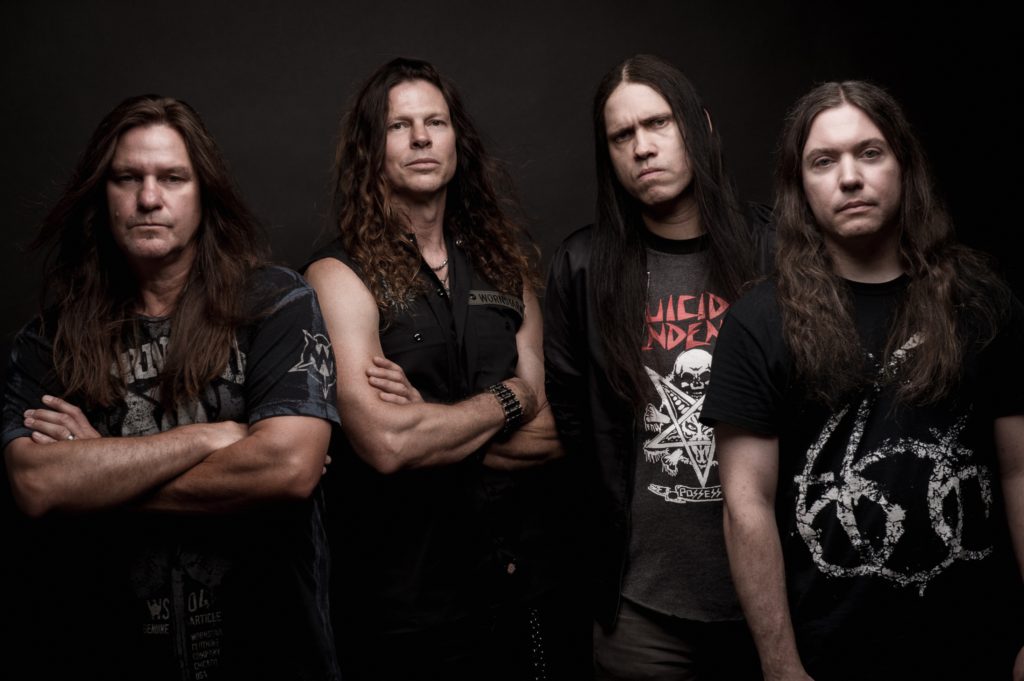 When you recorded Birth and the Burial, you didn’t have long to record.  How long did you have to record Old Scars, New Wounds?

CB: Well from inception the band which was sometime in December to the product being turned in was the first of May. So from that time, we went from nothing to having a CD on a label recorded with a band formed. That was the significant difference we probably took about the same amount of time to record this CD. But we didn’t have those other issues. We have our band we have our label. We had copyright material. You know what I mean. So there was a lot more in place this time around. So it’s great.

How was it working with Dave Otero?

CB: It was incredible.  I was very impressed right from the get-go. The one thing that turned me onto him as I remember when Birth and the Burial came out.  I was listening to the Devil’s Dozen on Sirius, and there was another band that was on the Sirius Devil’s Dozen at the same time, and that was Cattle Decapitation, and I would remember going wow that sounds impressive. I was impressed with that mix. I didn’t think about it much of the time I thought we had a great mix on our CD as well.  I remember noting that I liked their combination and time goes on this CD comes up, and we were planning to work with Zeuss again, but he had potential conflicts timing conflicts, so we had to find a backup in case he couldn’t make it. And through finding out and talking about Dave Otero and all the great recommendations we just thought that he was the better fit for us and just to go with him. He was impressive in the sense that not only does he have an excellent ear for a great mix and things of that nature but also he’s very open to letting you be a part of the mix. Like the way he went about it was a very accommodating and that’s not something you always get from an engineer you get engineers that a lot of them will be like listen I don’t want anybody else in the room when I’m mixing I don’t want you to know there’s no you get what I give you kind of thing. He was very accommodating, and he took our ideas and not only did he implement them, but he made them better.

Do all members of the band equally contribute to the writing?

CB: We all present ideas and then it’s just looking at what songs are looking for the best candidates for the CD. We wrote 12 songs, and we put 11 on this CD, so we do have an extra one that I think we’re going to hold out for an import or something of that nature. It’s funny because I’m in a band full of guitarists really because even Shawn is a guitarist that in a way, it’s funny.  Everybody writes, and everybody can write a great vocal line and the great melody, and the cool thing is the diversity that you get from just having individuals that can do that.   I think no matter what your writing style is you always have preferences as an individual and you can’t escape those preferences. And therefore when I write a song, I might like my melody to do this kind of thing it’s kind of a line where you know it ascends here and descends there.  I’m making up fictional circumstances. Matt might like the opposite. He might want his vocal range so that in itself creates variation even if it’s the same style of song.  To me you can’t you can’t beat that kind of a combination.

Do you have one song on this record that is your personal favorite?

CB: Yeah, I do. But I think that subject again can change over time. And the reasons why I like individual songs are different for liking other songs. Right now I like the Rise of Rebellion the final song on the CD. That’s because it’s got a lot of guitar shredding on it.  It’s got to raise your fist in the air kind of vibe to it. I love those kinds of songs.

How did you evolve from the first and second album has had this album? Did you expand your playing with your fingers tapping in all your different styles?

CB: Absolutely. It was on my mind before we even started writing for the album. I was like I need to write down all of the different technical styles that I want to try and incorporate in this CD and work out exercises and get things ready and have some ideas and that honestly never ended up happening.  It must have been in the back of my mind when I was writing because  I ended up working out some cool amalgamation of styles and just incorporating things that I’ve never done before. The solo and misinformation age for one-second solo, so I’m using almost like a right-hand classical guitar technique with Octave dispersed arpeggios and sliding in and out of them building a melody line between the upper and the lower nearly kind of like counterpoint between the upper and lower voices. And that’s something I’ve never done before, and it requires more than just an individual free finger on your right hand. It requires three fingers that are individual to be able to play it well. I mean I’m not sure, I’ve never tried it any other way, but that’s what I would imagine being the case.

With your Patented fingerpick, how does that help you with your style of playing?

CB:  Absolutely. So for example for that riff because I needed both my thumb index and middle finger and to be able to execute three notes at a time in a swift succession actually and next to each other. So it allows me to open up my hand like that so I can use those three individual fingers and still have the pick on my thumb. And then at the same time when I go into two-handed tapping stuff that keeps the pic attached to my thumb while I tap out multi-finger notes with the right hand.  I’ve started working on what I call my pick clip 2.0, and it’s a newer version.

It’s a little less this than the original, and the original one holds the pitch so tightly to your thumb that I think it is. It doesn’t allow for string loading what I call string loading where the pick will kind of flex in your grip a little bit and then kind of flick to the other side of the string. So this the new pickup allows that to happen. And to me makes alternate picking and things of that nature much more tonefull and you know better to execute

What size picks are you using?

I use any anywhere from a 1.4 to 1.14 in there’s typically where I kind of mess around with but it would depend on materials and stuff like that. Right now I’m using InTune Guitar picks and their jumbo jazz.

Do you have anything coming out for NAMM 2018?

So this NAMM show I will be releasing my Jackson Proline Hardtail HT6 version of my signature series Jackson guitars. That’s because of a massive demand for a hardtail version of my signature guitar and at an affordable level. And I just got the prototypes back. The last couple of weeks I’ve been testing them out, and they’re awesome.

Act of Defiance – Old Scars, New Wounds: A Near Masterpiece